Digging through the dirt of one’s own history requires work. Processing and reviewing past memories and experiences takes time.  Dirty History is a sensual representation of a sexual memory through ritual, soil, & time. On a bed of compost, I slowly perform a ritual. This ritualized movement is part-recollection of and part-penance for a very specific past memory. For my teenage self, it was a sexual rite of passage, a process, a new growth; it was also dirtying, hidden, raw, and secret.

Dirty History has been privately shared twice since the initial concept in a small university studio space. Each of these private views were “come and go” style observations as I was testing different longer durations of the work. Dirty History is very much in-development, a work-in-process. In keeping with my current performative interests, I’m encouraging myself to pursue different variations of the work, e.g. an outdoor site-specific variation without lighting or sound has been proposed.

(The photographs below were taken during the aforementioned private views on 17th & 25th March 2014.)

An intimate “staged” variation was shared with the public at the Marlborough Theatre for Brighton Fringe 2014. It was part of a University of Brighton MA Performance and Visual Practices group show with fellow artists Kate McCoy, Jennie Howell, & Katy Pendlebury.

(The photographs below were taken during that performance on 20th May 2014.) 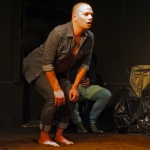 Recently, the work has started to spread out from that initial memory. Through poetry, both live & prerecorded, I am introducing a sampling of recalled (markedly queer) intimacies and sexual memories. I’m revisiting Dirty History for the final degree show of my MA. I envision the performance to include both movement & text, and the compost installation to be quite expansive.

Notice for my MA Degree Performances at the Sallis Benney Theatre, University of Brighton, Grand Parade

The installation of a 9x10m compost bed in the seating well of the theatre space was dirty, exhausting, and time-consuming.  The effort, however, definitely paid off. From both my own & the audiences’ perspectives, the performance & overall experience benefited from the expansiveness of the soil; there was more than enough material & space for the audience and I to be together in the dirt. The majority of the people who attended the three performances for my MA were more than willing to take off their shoes & socks and enter the compost. It was a great run.  I can’t wait to share Dirty History again in other contexts & spaces. Below are some random shots of load in & out: 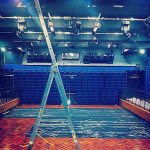 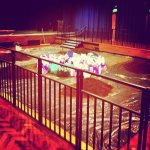